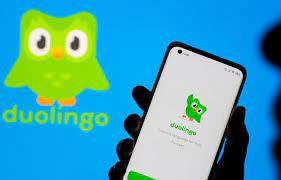 Bob Meese, Duolingo’s Chief Revenue Officer, took Spanish on the app for 6 months. When he was done, he was asked by a Forbes journalist “¿Hablas español?”. He didn’t understand what that meant and asked to repeat the question.

Like trying to learn Guitar by playing Guitar Hero

To be more specific, Duolingo is a translation game – you are trying to better translate from one language to the other but you’re never offered explanations on the choice of tenses, grammar, or pragmatics.

Like any other game, the app is trying to increase the time your eyeballs are glued to it. It would rather put another game in front of you, or even cut you out if you don’t pay, than explain to you what you got wrong about the last game.

Making a language seem harder than it is

I would wager that the app ends up doing something far worse than just wasting your time: discouraging you from learning a language altogether.

When I was moving to Germany, I took Duolingo classes for a couple of months. Upon arriving here, I realized that I couldn’t have the smallest interaction in German. All I could say was useless phrases like “the dog ate the banana”.

By using the app, I ended up walking away feeling that German is simply a language that is too difficult to learn – that a couple of months can’t even get you to have an interaction at the supermarket.

I now now that half that time spent with a tutor, or simply with a textbook would have given me far more utilizable basics than Duolingo.

Kerstin Cable, a language coach, pointed out back in 2015, that one of the most dangerous aspects of the app is “for a while, Duolingo told you, ‘You’re X% fluent.’ Which is one of the most insane things I’ve ever seen.” Fluency here is measured by how good you are at the game, which is not a scientific indicator of how good you are at the language.

The app doesn’t display those messages anymore, but it still tries to push the notion that you’re increasing your fluency rather than just getting ahead in a game. You get shareable images that say “I’ve been learning a language since X days”. The blur between “learning” and “playing” that this company has created is one of the biggest sources of frustration around the app.

To learn a language, you have to fail

Steven Sacco, a linguist, told The Cut back in 2019 that one of the biggest issues with Duolingo is that “so focused on giving you rewards, like check-boxes, that it hasn’t given you a lot of chances to fail,[…] and as a language learner, you have to fail. Eventually, you’re going to be in front of people, sounding like an idiot. It’s part of the process.”

Learning a language is a lifetime goal, especially for adults whose brain elasticity metrics are far less favorable than those of children. You have to have an outlet where you fail, repeatedly, to learn.

Studies show that there is a direct correlation between how motivated you are to learn a language, and how proficient you eventually become. If you are so unmotivated that a gamified app is your only language learning platform, chances are, and I’m sorry to break this to you, that you are not going to learn that language.

If you are truly motivated, then you’ll be looking at every outlet to improve your language skills: there are so many other apps that you can use in tandem with Duolingo (if you must use Duolingo) which have more focus on context (like Toucan), different media (like Beelinguapp or Lingopie), and countless tutoring apps. You’ll be watching movies in that language, reading news in it, seeking out native speakers, and maybe even traveling to where that language is spoken.

Bottom line, if you’re really motivated to learn a language, you shouldn’t be limiting your efforts to this app.